OUR CALL FOR INDONESIANS IN GERMANY-NETHERLANDS

"We know now that God works in all things to bring good to those who love Him, that is, those who are called according to God's purpose" (Romans 8:28)

In 1978 for the first time God allowed me to come to the city of Berlin (at that time it was still West Berlin) in Germany. In 1979 I moved to the city of Karlsruhe to attend the Studienkolleg and in 1980-1983 I became a civil engineering student at the University of Stuttgart. In these years the many experiences with God have greatly influenced the decision and change in direction of my life's purpose. In those years there was also an Indonesian Christian fellowship that was established in the city of Stuttgart and it continued to grow until a few years I returned to my homeland. In those days His Word continued to speak in my heart, Isaiah 6: 9 said, "Whom shall I send, and who will go for Me?" and finally, I could answer like Isaiah, "Here I am, send me!" That was my answer to God’s call in the middle of 1983. I made the decision to not continue my studies in civil engineering, but I returned to Indonesia in May 1983 to respond God's call and continue my education in theology.

I continued my education until I finished my studies at the Tiranus Bible College (STAT), Bandung. At that time Tiranus Bible College (STAT) was still called the Bandung Tiranus Bible Institute (IAT). I also took part in several church services e.g. became a music player in the group "The Apostles"; became one of the pastoral staff members at the Pentecostal Messenger Church in Bandung and was involved in church mission services. In those years I received another call as written in the Bible to come to Macedonia (Europe), "Cross over and help us!" (Acts 16: 9). Before fulfilling that call, the Lord brought me together with my "rip", Sisca, who eventually became my faithful wife and helper. We received the blessing of marriage on October 18, 1986 in the city of Bandung.

In July 1987-1988 the Lord opened the way for us to take the Missionary Candidate Course at the Foreign Mission Board to serve in Germany. Through this collaboration between our local church and the Mission Board, God finally fulfilled His call for us for missionary work in our lives. Our departure was confirmed by His Word from Isaiah 55:12 which says "Truly, you will depart joyfully and will be delivered peacefully; the mountains and hills will rejoice and shout in front of you, and all the trees in the field will applaud. " Finally we were able to leave Indonesia and went to the mission field in Germany.

After following the mission training at the WEC Mission Agency - Germany for 6 months (April to October 1989), we got the opportunity to serve in various alliances in Germany and in the Netherlands. Throughout the years and even to this day our family and all the ministry partners who have been sent by God to build His church have received grace from God to sow, plant, water and reap spiritually in various places. The Indonesian Mission Church (GMI) e.V. which was born in the city of Frankfurt/M about more than 25 years ago (1993) and which eventually expanded to several Cities in Germany and in the Netherlands are churches and mission posts built by God himself (Psalm 127: 1 - " … If it is not the LORD who built the house, the efforts of those who built it are in vain… ”). GMI is part of the Body of Christ in Europe, Indonesia and throughout the world. May we, who have been entrusted by God in carrying out the task of planting and pastoring this church, will always fulfill His plans until the end. 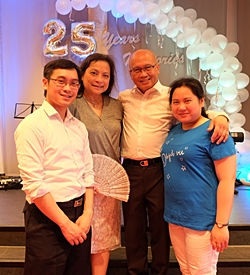